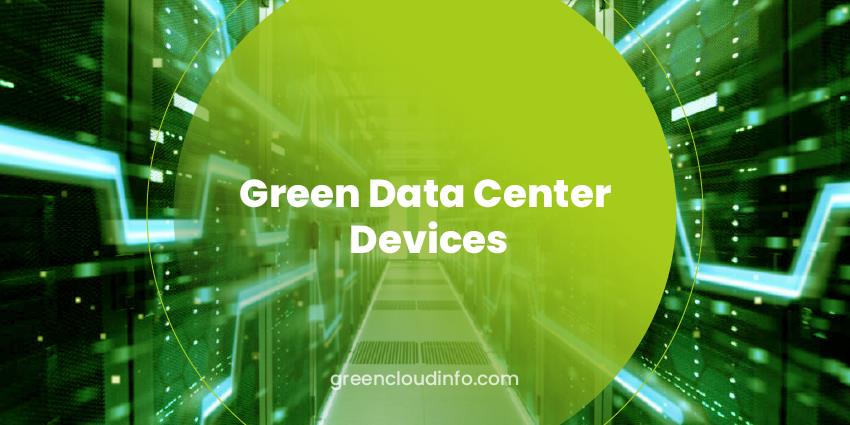 While the industry is usually focused on more traditional energy reduction methods to address power consumption issues, there are now a variety of data center devices and systems which help reduce the amount of energy consumed by data center facilities.

Today’s data centers are using more and more devices to power their operations. These can range from computer hardware to monitor climate conditions inside the server rooms to energy-saving systems that replace outdated cooling methods.

But as the number of devices increases, so does the electricity they use. There have been some efforts made by various companies to create more energy-efficient products, some of which are already in use today and others that may be ready for integration soon.

Leveraging green data center devices can scale back energy consumption without sacrificing efficiency or performance, and it can do so in as little as a few months.

The most important thing you can do to reduce your data center’s carbon footprint is to build it green from the ground up, but several products can help you make your data center more energy efficient even if you’re working with an existing facility.

These devices help automate data center processes and reduce the energy used by either cooling or powering devices.

The first control device we will discuss is a fan-speed controller. This device allows you to control the speed at which your fans run to maximize the utility of your air-conditioning system during hot weather months or while using free cooling.

Regarding controlling temperature, temperature controllers help regulate the flow of cold air through the server racks by opening and closing vent doors, while temperature probes measure the temperature and send wireless updates of any changes to the controller.

There are many different types of fan-speed controllers available, but they all operate on the same principle: To allow you to set a maximum speed at which your fans may run. This will enable them to continue operating in case the temperature in your data center rises above an acceptable threshold but prevents them from running at full speed when there is no need for them to do so.

Power monitoring is another critical tool in today’s green data centers. While traditionally, power was not seen as a big concern for data centers, recent technological advancements have clarified that power needs to be monitored just as carefully as temperature.

Energy efficiency power strips are one example of the new green measures that have taken over traditional power strips. They feature built-in circuit breakers and switches, which allow for much more accurate control over power flow into the device, giving you better control over your electrical bills.

Green Data Center Management System (DCMS) is software that helps you manage all networked computers and servers in your company or organization. It features tools for detecting and isolating hardware problems with any device.

This green data center device Is a “smart” plug, an electrical outlet that monitors the amount of energy being used by the device plugged into it. The smart plug can automatically turn off the power if the device doesn’t need to be on for extended periods, such as overnight or during weekends. These devices can also help save energy by automating data center processes that reduce or eliminate standby power or unnecessary cooling.

Rack power distribution units (PDUs) are an essential component of the data center and are a significant factor in reducing energy consumption. The main function of a rack PDU is to distribute power to equipment mounted into 19″ racks, but they also protect against overloads, short circuits, and other problems that can cause fires.

Green data center power distribution units are just one way to make your data center more efficient. Adding a PDU to your data center rack can add, remove, or adjust power supplies from the rack to your servers more efficiently. Power strips are also crucial in the server room because they allow you to shut off power from a malfunctioning device. However, there are many green alternatives to traditional power strips and PDUs today.

Datacenter PDUs also function as surge protectors and prevent voltage sags. With such a central role in data centers worldwide, they are an excellent place to focus on reducing your carbon footprint and going green.

One of the best ways to reduce energy usage is through efficient lighting. Replacing fluorescent lamps with high-quality, long-lasting LEDs can be a quick way to start saving money. This is especially true for older buildings that need to replace all lighting. Replacing a standard fluorescent light with an RGB LED can reduce energy by 72% while increasing brightness by more than 300%.

RGB LEDs can be used instead of traditional lighting throughout data centers, including server rooms, hallways, and equipment rooms. When paired with several colors of light in one fixture, they can improve worker satisfaction by giving the employee a sense of peace and well-being and increasing their productivity. Studies have shown that employees who work under natural lighting are happier, healthier, and more productive than those who don’t.

There are many ways to reduce your data center’s energy and operating costs. Several devices can reduce power consumption by monitoring, controlling, and switching electrical loads. Green data center devices can help data centers in a variety of ways.

A green data center is responsible for taking care of its environment by reducing its carbon footprint to make a difference for future generations.

Green data centers are all about thinking about energy efficiency, looking for ways to reduce your carbon emissions, and making sure your business is doing its part to protect the environment. If you have any idea about data center efficiency, please let us know!